Posted at 18:43h in LUNA BLOG, Our Brides by dayle

Tell us how you two met:

We were sort of in a similar friend group when we were younger and Cairns is not that big. Brendan spent a few years travelling / living in Canada and South East Asia when we really started to become friends but when he moved back I was working FIFO in WA so we actually spent about a year trying to “catch up” before one night in 2013, we finally did!

We were back in Canada in 2019 and it was the night before we flew home to Aus. We’d had a really long day driving and I easily could have just gone to bed but I’d told him about a place called Capilano Suspension Bridge and he said he wanted to go. In winter, they light up the rainforest, bridge and treetop walks with fairy lights – it’s really beautiful. He proposed in the middle of one of the treetop wall bridges (above water). I was totally shocked and panicked about him holding a ring over a bridge with water under it in the dark! I was absolutely not expecting it, we’d been sharing luggage the whole trip and he wasn’t weird about his bag at all. It was the best end to an already epic snow trip.

THE DRESS – tell us how you found THE ONE?

It was a struggle for me! I spent a weekend in Brisbane trying on absolutely everything and found that because I’m short, most dresses just didn’t look right on me! Eventually I went to Chanel Jaymes Bridal in Cairns and it was the first dress my mum and best friend saw on the rack and loved it straight away, just as I did. So I just decided not to overthink it – I loved the simplicity and crispness of it and it felt like it was made to suit someone as small as me.

What was the wedding style/mood for your day?

Relaxed and fun but sweet and loving. The venue was a private cane farm and due to the uncertainty with COVID, we decided to change from inside the shed to open air. I think that gave it a really romantic vibe, being under the stars during winter with festoons and candle lights.

On your wedding day, what were the moments that made you laugh/cry the most?

Oh man, so many feels! We were already on a high to even be having the wedding on our original date, everything felt so heightened and intense – even the good stuff.

My mother-in-law was actually taken to hospital in an ambulance the morning of our wedding. Brendan told me she was in hospital and wouldn’t be coming to the wedding at our first look. So that was BIG emotions for us and made it particularly hard to get through the first part of the ceremony. When I went back to the room for touch ups, there wasn’t time to even talk about it so the whole day was very bittersweet and it was on our minds all day.

Brendan said his vows (we wrote our own personal vows) and I was so overcome I tried to give him a hug and a kiss to which he basically palmed me away and said: YOU CAN’T DO THAT, which made everyone laugh.

We were so organised and on time but we took my nose ring out to do my make up and then I couldn’t get it back in with my acrylic nails. It threw us completely because everyone in the room spent SO long torturing my nose trying to get it back in. I knew the photographer and videographer were staying calm externally but panicking about time. We had to re-do my makeup and it made us late for the first look. Hilarious now but so frustrating at the time that such a silly thing threw us and then my nose watered for the rest of the day, particularly when I was saying my vows!

Any tidbits of advice for our future brides?

COVID really humbled us when it came to wedding planning. 31 July was our original date and we always had under 100 people but we put it all on hold in March. When stage 3 restrictions were announced in Qld, we decided to try to make it happen because we felt that there would be an inevitable second wave and this window might be brief.

It made us stop overthinking tiny details and make fast decisions which was a blessing for our sanity. If you love something, go with your gut – you don’t always need 50 options to mull over.

The first look was the best thing we ever did – if you’re wondering if it ruins the aisle moment – it doesn’t!

As hard as it is, a phone call to vendors is sometimes a better idea than an email when you need to discuss an issue / problem. 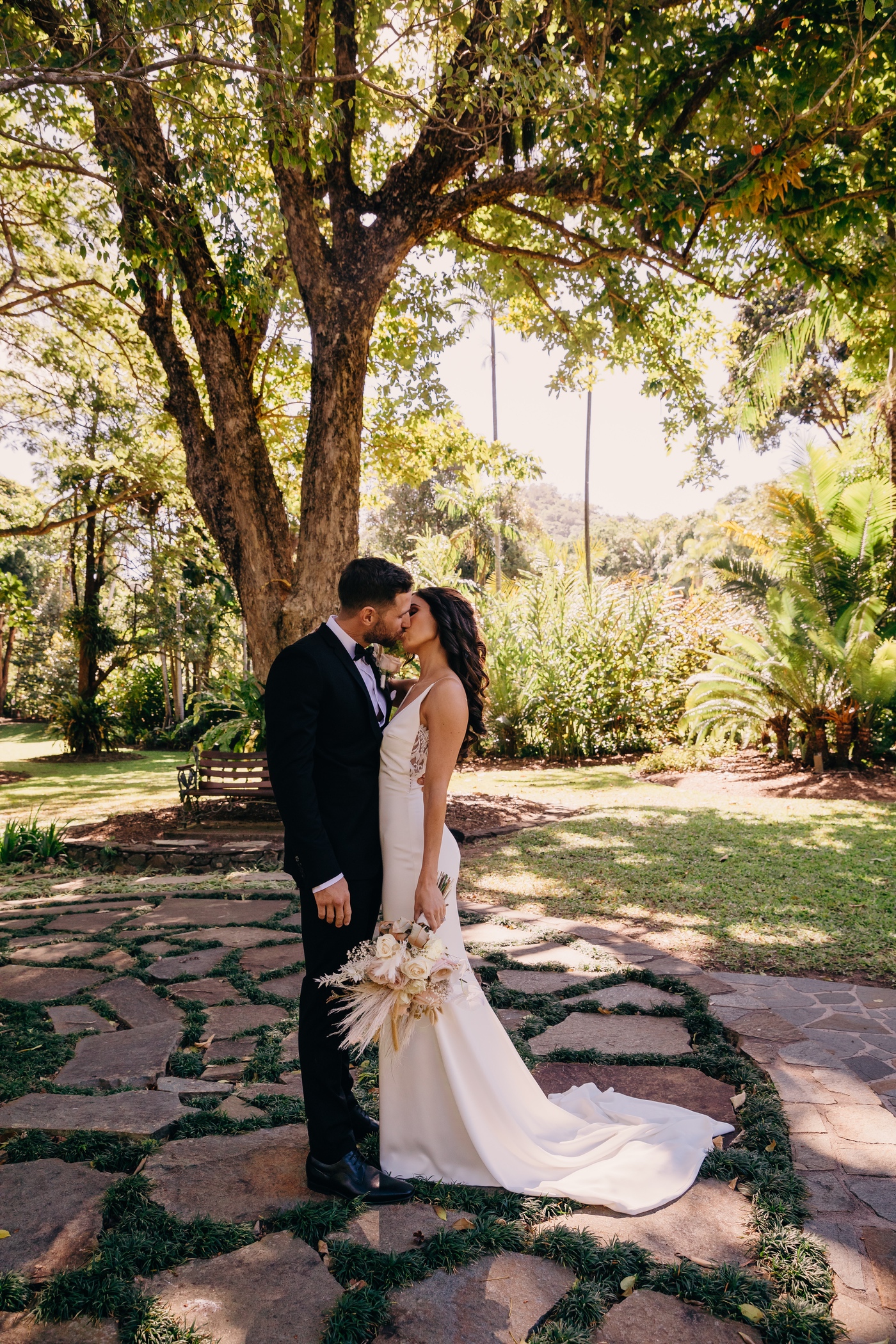